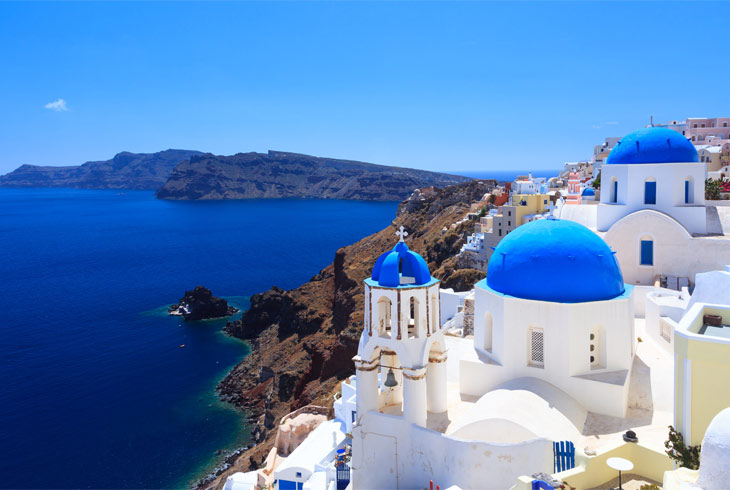 
The iconic island of Santorini with the unique morphology is home to more than 200 stately churches and monasteries that have stood for centuries. Some enthrall with their traditional Cycladic architecture, distinguished by whitewashed walls and blue domes, while others have baroque influences. And, although they all have a distinctive charm that captivates, ten Santorini churches definitely deserve a place in every visitor’s must-see list. 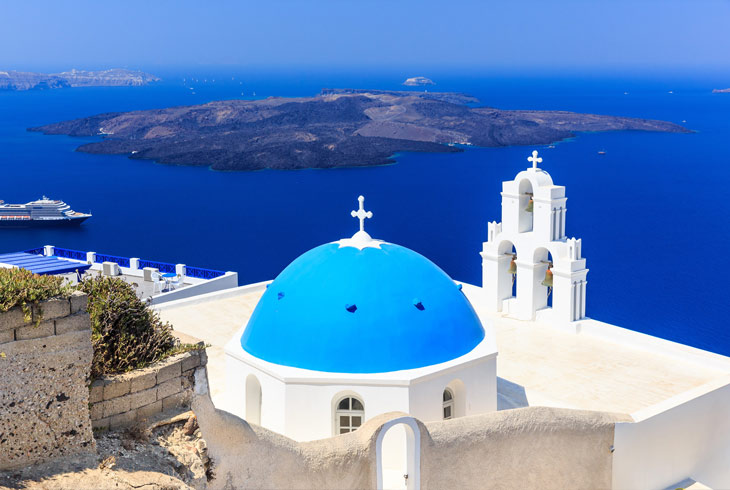 Set against the shimmering azure of the glittering Aegean Sea, the Santorini Blue Domes feature in almost every single postcard from the quintessential Cycladic island. The most photographed Santorini blue domes churches are located in Oia and are the churches of Agios Spiridonas (Saint Spyridon) and Anasteseos (the Church of the Resurrection). Both are built at the edge of the cliffs right next to one another.

While still wandering the streets of Oia, you may also want to visit another Santorini blue domes church, Panagia Platsani, which is dedicated to the Akathist Hymn of the Virgin Mary. Originally, it was built inside the castle of Oia, but a destructive earthquake in 1956 made the soil extremely unstable and ruined the church. It was rebuilt, though, at the center of Oia, where it stands to date. It now hosts all the major annual celebrations in its beautiful front courtyard. 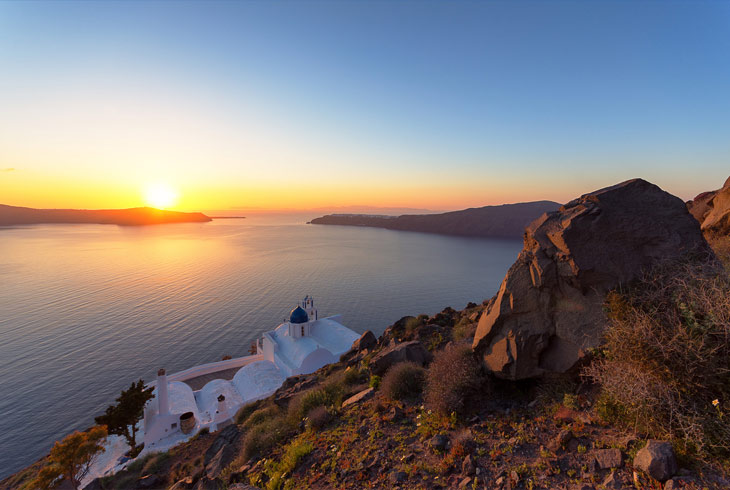 2. The Catholic Cathedral Church of St. John the Baptist (built in 1823) 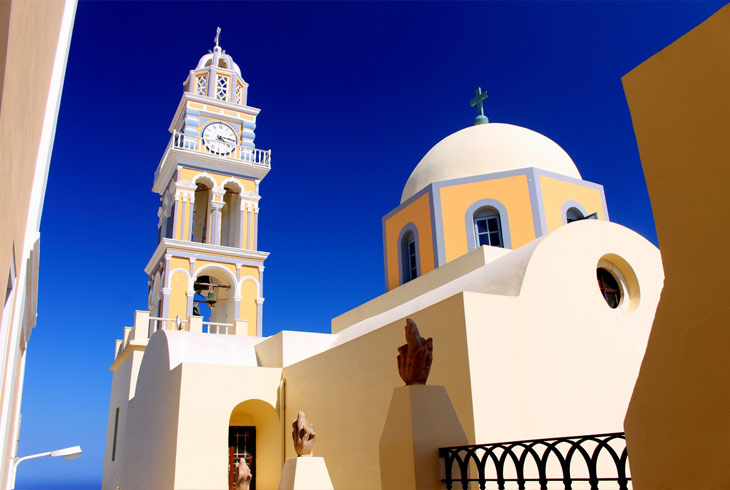 Leaving the Santorini blue domes behind, you will soon realise that the island has a wide range of ecclesiastical buildings that impress just as much. The Cathedral of St. John the Baptist may not have a blue cupola crowning its whitewashed walls, but its Baroque elements (see blue-grey molding, peach colouring, and clock tower) make it stand out. It is located in the heart of Thira (aka Fira) in the Catholic neighbourhood and was rebuilt in 1970 after the 1956 earthquake. 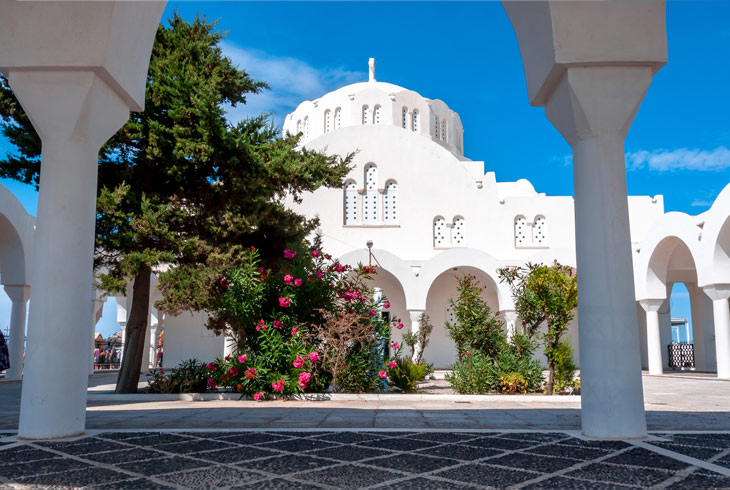 No Santorini family holidays could be complete without laying eyes on this marvelous blend of two architecture schools. The Orthodox Metropolitan Cathedral in Fira combines Aegean features (frescoes painted by local artists and whitewashed walls) with details that seem kindred to the St. John the Baptist Cathedral (the rolling arches, the large structure, and the wide dome). If you seek fantastic views of the volcano and the caldera, then this is definitely one of the best spots to give you that. Plus, it is only a short drive from many Santorini luxury hotels. 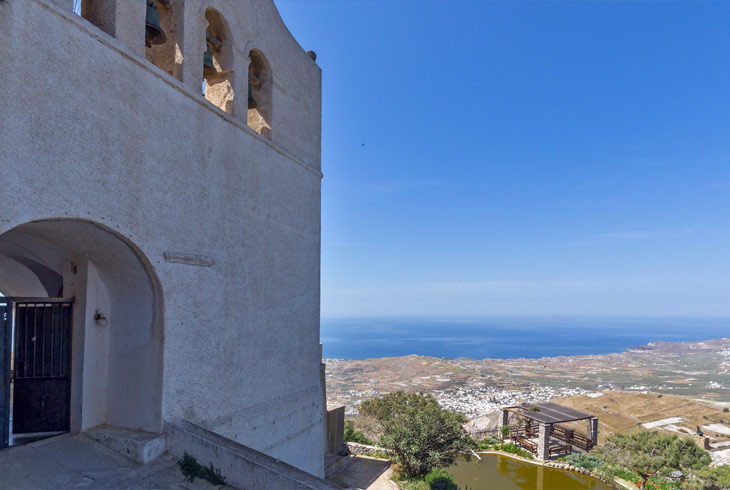 The monastery of Profitis Ilias (Prophet Elijah) is an 18th-century sanctuary that is built on the highest point of the island, on a mountain that bears the same name. Just a few kilometers away from Pyrgos village, it used to serve as a Greek school and was once a hub exerting cultural, intellectual, and economic influence. After the 1956 earthquake, it was reconstructed in a fortress-like style. Today, its religious icon-filled chapel is open to the public while you may also find goods cultivated and produced by the monastery’s monks available for purchase.

Nicely tucked between the villages of Imerovigli and Firostefani, the monastery of Agios Nikolas (St. Nicolas) is dedicated to (1) Agios Nikolaos (St. Nicolas), (2) Zoodoxos Pigi (Life-giving Spring in Greek), and (3) Agios Panteleimon (St. Pantaleon). It is the second-oldest monastery on the island and used to be the private chapel of the Gizi family, who decided to turn it into a monastery. The current position of the monastery is not where it originally stood. It changed its location in 1815 following the archbishop’s decision and now also hosts both an ecclesiastical and folklore museum with rare Byzantine icons, including that of Agios Nikolaos.

The church of Panagia Sergena (Virgin Mary the Patroller) or Panagia tis Tripas (Virgin Mary in the Hole) is carved in a volcanic rock near Vothonas village some 20m above the ground and is completely hidden from sight. In fact, it looks like a wide hole from the outside. Back in the 1700s, it was locals’ refuge during the Turkish rule and also provided shelter to Santorini residents during pirate invasions. To access it, one would have to climb the mountain and then have somebody already in the church place a wooden ladder, which was pulled up after the refuge-seeker entered the cave. Today, you may access the church through a gravel passage and some steps. Once you get there, you will be rewarded with stunning views and a unique sense of tranquility.

Considering that the most emblematic Santorini churches are spread throughout the island, it helps to find accommodation in one of the larger villages, such as Oia. That way, you can easily reach all parts of the island. For a truly authentic experience, try to find Santorini hotels with private pool, modern comforts, a full range of VIP services, and traditional Greek hospitality.